This report is a summary of SWAMP activities to date. The following is from the Executive Summary.

Prior to SWAMP’s initiation, the Slocan River Streamkeepers Society (SRS) had commissioned two studies, an Aquatic Habitat Index (AHI) of the Slocan River and a Sensitive Environment Index (SEI) of the offsetting riparian areas. The Columbia Basin Watershed Network (CBWN) in cooperation with Selkirk College sponsors a summer mapping program with the result that the SEI and AHI have been merged into one map for SWAMP.

The Slocan Lake Research Center (Richard Johnson) (SLRC) also works with the Selkirk College Geomatics department by providing a list of projects that students might want to undertake as a term project. This resulted in aquifer mapping in the upper Slocan River Valley in 2015. This project, aquifer mapping, will be expanded and will continue. In 2017 a Selkirk student undertook an evaluation of remote sensing methods to identify potential wetlands in a watershed. Both of these projects were inspired by SWAMP.

SWAMP also spawned a series of projects that continue under a life of their own. Developing protocols to use Benthic Invertebrates to measure wetland health is an ongoing research project by Integrated Ecological Research (Darcie Quamme) under the SWAMP collaborative. Two wetland restoration projects are underway under the direction of the Slocan River Streamkeepers Society. In 2018 a group, deriving its nucleus from SWAMP members, initiated the Bonanza Biodiversity Corridor committee to study and protect that area at the northern end of the Slocan Watershed. The SWAMP 2018 Mapping supports that work.

Two Acoustic Recording Units (ARU’s) have been acquired and are managed by SLRC. They record bird and frog vocalizations and have been deployed at various wetlands to document the “singers” each spring. This baseline data gathering will continue, especially in the wetland restorations mentioned above.”

Check out this great new video by the Slocan River Streamkeepers Society to see what the restoration site looks like in 2018!

A wetland restoration project on private land at Crooked Horn Farm in Winlaw, BC was initiated by the Slocan River Streamkeepers in 2016 and completed in Summer 2017. Previously in 2013, the Streamkeepers also implemented an adjacent riparian restoration project including in-stream fish habitat structures on the property. This project is adjacent to Slocan Valley Rail Trail, this allows great opportunities for public education and raising awareness of the importance of wetlands.

A 35-acre wetland at the north end of Slocan Lake has a new owner and a new name. In August  2017, following an intensive fund-raising effort, the Valhalla Foundation for Ecology and Social Justice, stepped forward and purchased what was formerly called Bonanza Marsh. The new name – Snk’mip (pronounced “snick-mip”) Marsh Nature Preserve – comes from the local First Nations’ language meaning “head of the lake.”

The FWCP has provided $50,000 to the Foundation to support the land acquisition costs, enabling other previously-collected donations to be applied to future stewardship and restoration work. The Foundation plans to establish a conservation endowment fund so the long-term stewardship of the wetland is ensured.

The property supports wetland and riparian forest habitats, and is an important stopover for migratory bird species including the Blue-listed Trumpeter Swan. It is also home to several other species-at-risk such as Grizzly Bear, Giant Helleborine of the orchid family, and Little Brown Bat. It also serves as an important corridor for many other species moving between Summit and Slocan Lake.

“The Valhalla Foundation thanks the Fish & Wildlife Compensation Program and the many people who contributed to saving the marsh,” said chairperson Wayne McCrory.

The property is now being managed as a nature preserve, with non-motorized access.  Three heavy-duty gates have been installed and large boulders have been placed at various access points to deter off-road vehicles. Walkers are welcome to visit the area, at their own risk. Dogs must be leashed.

The first stages of clean-up and some biological surveys of the Snk’mip Marsh Nature Preserve have been completed. This has included an inventory of lichen: over 90 species have been identified, with another 50 to be confirmed.

Several small structures have been dismantled after it was determined that bats were not using them; and garbage, scrap metal, and abandoned materials have also been removed from the site.

Supporting opportunities to secure and steward lands with high conservation values for wetland and riparian areas is a high priority for the Columbia Board. Projects like the Snk’mip Marsh Nature Preserve aligns with the FWCP’s Riparian and Wetland Action Plan, and will support a diversity of species in the Slocan Valley for years to come.

Beating back the Burdock at Summit Lake Provincial Park

September 26, 2017:  We had a great day working with students from Nakusp Elementary School with some of our partners including: the Columbia Basin Watershed Network (CBWN), Central Kootenay Invasive Species Society (CKISS), Arrow Lakes Environment Stewardship Society, and Darcie Quamme, biologist with Integrated Ecological Research. Darcie demonstrated how freshwater invertebrates from play an important roles in the food webs of wetlands, streams and lakes to the Nakusp Elementary School children. This field day was supported by the Loblaws/World Wildlife Fund (WWF).

At the same event, CKISS worked with the youth to carry out a  restoration project at Summit Lake Provincial Park that mechanically removed a patch of invasive Burdock located at the entrance of the park. With help from volunteers, students from Nakusp Elementary School and BC Parks staff the area was replanted with a variety of native species.   Article from CKISS here. 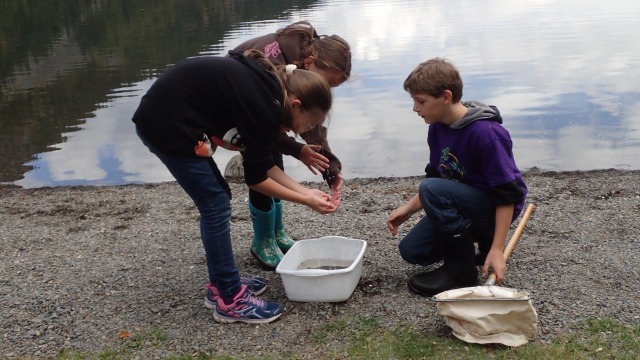 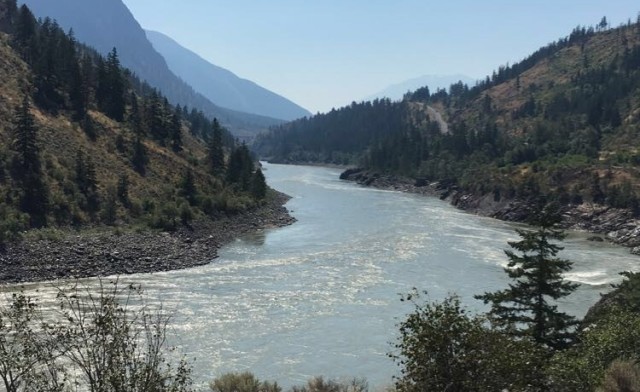 One of our SWAMP Biologists, Ryan Durand, of EcoLogic Environmental Consultants, participated as a presenter in a BC Wildlife Federation workshop including 16 participants from the Lillooet region.  Participants were lead through wetland classification, soil analysis, plant identification, and assessment forms.  See BCWF blog for more info and quote below from the article.

This workshop was in partnership with Splitrock Environmental, an Aboriginal-owned business specializing in environmental services, ecological restoration, and native plant propagation. Many participants were from the Xaxli’p (Fountain) and Xwisten (Bridge River) First Nations, which are two of the eleven self-governing communities that make up the larger St’át’imc Nation. This course was requested to provide an introduction into wetland inventory and assessment for participants to use in their work for Splitrock Environmental and the Xaxli’p Community Forest, among other organizations.

Map our Marshes courses are typically only 8 hours long, this extended workshop allowed for more time to discuss wetland assessment, and much more time spent in the field! This workshop was made unique through both the format and the opportunity to collaborate with several First Nations groups. Participants were all involved within the environmental field, and as such there was the opportunity to learn from both instructors and participants alike. Most participants were or will soon be involved in wetland assessment projects, and used this workshop as an introduction.

We began in the classroom of the Xaxli’p Band Office, located in the Fountain Valley. It is always interesting to have a different instructor lead the course, as it allows for new information to be brought forward. The value of classification, for example, was discussed by Ryan and is three-fold: it 1) raises awareness of wetland types, 2) allows for ecosystem services and functions to be recognized, and 3) allows for cross-referencing against the provincial database (Conservation Data Centre) to communicate the value and rarity of certain wetland types. However as we began to attempt to identify wetlands in the field, participants were quick to discover that many wetlands don’t fit well into a single classification.

Species-at-Risk in the Slocan Watershed

Posted on February 9, 2017 by slocanlakerc

The Slocan Wetland Assessment and Monitoring Project (SWAMP) is pleased to announce that a report on species-at-risk in the Slocan watershed has been completed. The report describes the occurrence of 47 species-at-risk that have been found through a literature search as well as two years of SWAMP field work. An additional 11 species have been identified as having a high potential to occur here. The BC Conservation Data Centre only has 20 species listed in its database for this area.

This report shows that more field work, beyond the 154 locations that have been visited, is needed and will probably uncover more threatened species. Wendy Castellanos, a student at Selkirk College, is currently investigating several methods of identifing the location of more wetlands. Preliminary results indicate the potential for 345 wetlands over 0.3 hectares in size exist in the Slocan watershed. Since wetlands often contain several assemblages of vegetation and the associated ecosystems, the potential to identify more species-at-risk is high. SWAMP plans to continue mapping and classifying wetlands in the Slocan watershed.

The research for this report was funded by Columbia Basin Trust. 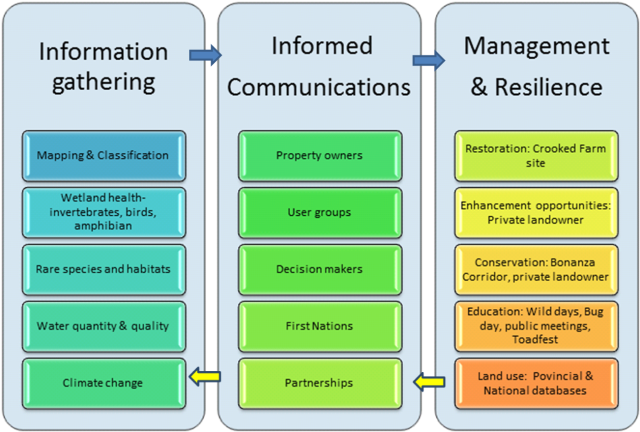 Read the report: The Swamp Beacon

Want to learn more about your wetland?

If you have a wetland and want to be part of an innovative study, we are looking for wetlands on private land to be included in our study on wetland health!

Marcy is an ecologist, environmental educator and conservation strategist. Based out of both New Denver and Revelstoke, SWAMP’s Marcy Mahr has organized many of the wetland days in the Slocan Valley and is involved with both SWAMP’s technical team and Steering Committee.  She has also co-authored the Columbia Basin Trusts’s Environmental Education Opportunities Assessment and is on CBEEN’s Environmental Education Leadership Clinic Facilitation team.  Congratulations Marcy!